Gorgonzola lasagnette with radicchio and potatoes

A recipe as special as Christmas. Andrea Ferrari, the chef of the Rià in Mezzomerico suggests a unique recipe as far as taste and quality goes.

Mix the flour with the eggs for about 15 minutes and let the dough rest in the refrigerator for half an hour before using it. Roll your dough into a thin sheet of pasta and then cut it into small rounds (lasagnette) using a cup. These will then be cooked into boiling water for 15 min., drained, and dried. Meanwhile, skin the potatoes and put them to boil, julienne the radicchio and brown it in a skillet with garlic-lavored oil for about 10 minutes, adding 2 tablespoons of sugar cane and the balsamic vinegar. Once the potatoes and radicchio are cooked, we can start preparing the lasagna. Place the radicchio on top of a lasagnetta, then add a layer of mashed potatoes using a potato masher and top it with a slice of sweet gorgonzola. Brush a lasagnetta with garlic-lavored oil and place it on top of the illing, then add a second layer of illing as above. Place a third lasagnetta on top of the second layer and cover it with grated cheese. Then bake the lasagnette at 180 degrees to let the cheese melt until it becomes golden-brown. Meanwhile, melt the sweet gorgonzola in a double boiler until you get a gorgonzola fondue. After removing the lasagnette from the oven, place them on a plate and pour the fondue all over them. Garnish with long leaves of radicchio, radicchio sprouts, and pomegranate seeds.

Gorgonzola lasagnette with radicchio and potatoes 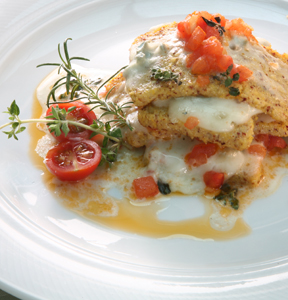 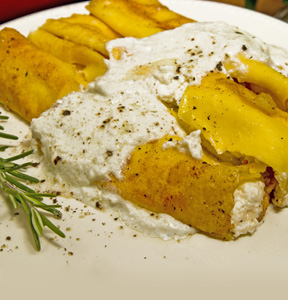 Lasagne with Gorgonzola and chicory 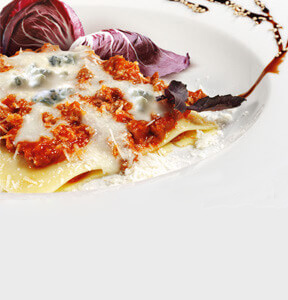 TRY OUR OTHER RECIPES!
HAPPY HOUR