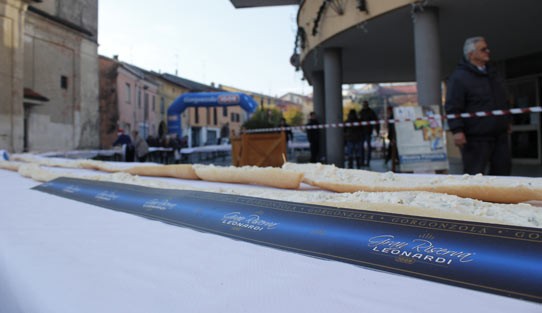 On December 15th, in Bellinzago Novarese (NO), a sandwich filled with Igor Gorgonzola cheese.

Imagine a gigantic loaf of bread, a kilometer long, 100 volunteers spreading mountains of Gorgonzola cheese on it and what do you get? A sandwich that is worth a Guinness World Record. It's not a trailer of a Gulliver movie, but an event you can't miss, and it's all going to happen in Bellinzago Novarese on December 15th.

This year, Pro Loco is not only going to be traditional, but is going the whole nine yards, thanks to the support and collaboration of IGOR Gorgonzola, the leading manufacturer of Gorgonzola cheese, whose headquarters are not far from Bellinzago. A kilometer of BREAD and GORGONZOLA, put together to create the longest sandwich that has ever been seen stuffed with this exclusive DOP cheese.

The event will be promoted nationally and internationally, attracting many onlookers in the town of Novara. The aim is to raise funds for charity by giving away the sandwich to whoever will show up to see this challenge.

To give it stamp of approval, a request of certification has been made to the Guinness World Record. If it is accepted and the attempt to break the record succeeds, the new record will be enlisted in this world-renowned book of records.

A beautiful adventure that the Pro Loco of Bellinzago Novarese, in collaboration with Igor Gorgonzola and other sponsors, is about to embark on! Sure enough with all of your support it will reach the desired result.

Due to the great success of the previous events, also in this 2013 edition, the Pro Loco Tourist Association of Bellinzago is organizing the traditional CHRISTMAS MARKET AND PATH OF TREATS on the same Sunday December 15th, from 9:30 a.m. until 7:00 p.m., along the streets of the historic city center. The aim is to promote local business and, at the same time, support volunteer and nonprofit associations. Last but not least, crêpes will be offered free of charge to all visitors, as well as lots of other goodies.